While pondering my next batch of hard cider, I thought about an ongoing discussion. Should fruit, berries or any other flavor addition be added to cider must before pitching yeast or after initial fermentation has neared completion?

I have read many posts where people have made a new blueberry or peach cider only to be disappointed with the lack of fruit flavor in the final product. Typically, someone will quickly comment that the fruit should be added in secondary which seems to be a generally accepted technique. Even I suggest it, although I have never done a side by side comparison.

So, I decided that I would try a cider experiment!

When Should Fruit Be Added to Cider?

The goal was to take a closer look at how flavors are affected by fermentation and whether fruit additions should be made before fermentation or after initial fermentation when making hard cider. Or, if it even matters at all.

To do this experiment, I prepared two, one gallon batches of cider using the same apple juice with a 1/2tsp yeast nutrient and a 1/4 packet of Nottingham Ale Yeast in each.

One fermenter received 2 cups of frozen blueberries while the other remained plain. After fermentation slowed, nearly two weeks, I added blueberries to the plain cider and let them both age for a few weeks.

Once I was confident that all of the sugars in the berries had been consumed, I racked both of the batches into clean and sanitized fermenters. At this stage, I wanted to make sure all of the sediment settled before I moved on to bottling.

About one month later, I cold crashed and bottled both batches of cider making sure to label each bottle so they didn’t get mixed up.

I also had to take a quick taste to see if anything incredible was happening!

Did They Add Additional Flavor to the Cider?

My first reaction to the two ciders was that they are almost identical. There were only very slight differences between the two but nothing big enough to say one was better or worse.

Overall, I knew that it wasn’t straight apple cider, but I’m not sure I would have been able to pick out the blueberries.

Six months later, I have finally finished another tasting and can confidently write that I don’t think there was much of a difference in taste, but there was slightly more aroma in the post-fermentation batch.

If there was any difference in flavor, I would say that the pre-fermentation batch was slightly more tannic which I can only attribute to the whole blueberries being in the fermenter for two weeks longer. I guess that was a flaw in my experiment…

As for the color, I couldn’t see a difference at all. Both did not hold the blue color they acquired in the fermenter but they did clear very well.

When Should Flavor Additions Be Added To Hard Cider?

Overall, I personally like to add fruit, berries, or any other flavor addition after initial fermentation is complete.

This experiment made me look at the process a little differently than I expected though.

Since I don’t always know how long initial fermentation will take, adding fruits or berries later will allow me to control the time that they are in the process. I believe the tannic properties in the pre-fermentation batch came from the extended exposure to the berries so that maybe my next experiment.

I also think this should be tried with other yeast and fruit additions as they will all change this experiment in their own way.

Do you have any thoughts? Please leave a comment below!

This site uses Akismet to reduce spam. Learn how your comment data is processed. 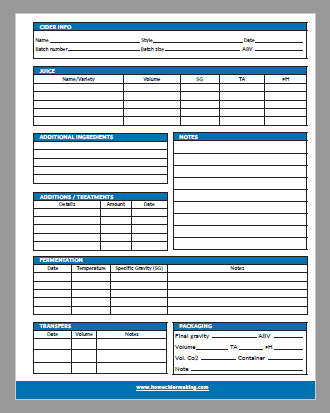 Keep track of your cider recipes and results by documenting them on a Cider Log!

Subscribe today to receive a FREE Cider Log PDF and be the first to know about new recipes and fresh experiments from Home Cider Making!

Great! Here is your free Cider Log PDF, Cheers! (click to open) This link will also be e-mailed to you just in case you miss it!